An overview of the experimental test cases is provided here. The values of the PDP and GNDP in the 2 experiments are first provided. Then experiments are described, and the DOAP given. The measured quantities are then presented in tables.

The LDA system used in experiment 1 is based on fiber optics, with back scatter method and has processors based on spectrum analysis of the back scattered signals. The crossing of the beams generates an ellipsoidal probe volume, of radius approximately 0.12 mm and length 0.9 mm. The measurement point can be chosen and moved using a 3D traverse system. The green and blue beams belong to 2 planes whose intersection is called the LDA probe axis. The measurements are operated using data acquisition software.

Data processing. The data acquisition software includes some automatic filters in order to retain the record of only those considered valid among the detected particles. Raw valid data are recorded for each position: velocity, transit time and arrival time. After the acquisition, data can be processed.

Variables measured. For each position, all the valid data have been stored. Several statistical quantities have also been estimated for each position, given in the following Table. The cross-moment is estimated taking into account only the pair of data belonging to a coincidence window of duration 50 ms. This condition reduces the number of valid points taken into account to estimate this statistical quantity. For experimental database #1 recorded using LDV measurements at different positions, the statistical averages are computed taking successive particles at the same position. For experimental database #2 recorded using PIV, the statistical averages correspond to a ensemble average over several successive images.

Measurements procedure. The 4W Argon Ion laser used in experiment 1 was used in this experiment also. The measurement system employed here is a two-dimensional two-component (2D2C) system utilizing a single camera. The PIV system was designed and system integration was done at VUB. The software used was developed by DLR, Gottingen, Germany. This set of experiments were conducted under the following specific conditions:

• Mirrors and cylindrical lens to generate the light sheet of nominal thickness 2 mm.

• High-resolution full-frame interline transfer CCD camera for image recording. The frame rate of the camera is 12 s1 and has 1026x1296 pixels CCD array. A frame grabber transfers the frames to a hard disc.

• The pulse duration was 600 ms and the pulse separation was 2500 ms in this experiment.

Boundary/Initial conditions. A carefully controlled amount of water was allowed to flow through the model burner in the test-rig shown in Figure 5. De-mineralized water at room temperature flows through the model at 4.09x10-5 m3/s producing a mean exit velocity Ue = 0.09 m/s in this particular set of experiments.

Data processing. The data acquisition and processing software used at VUB was for spatial cross correlation velocimetry. The accuracy of measurement depends on the hardware and set-up conditions. Interrogation area of 32x32 and 16x16 shift in pixel level was employed for data processing. The maximum displacement was of the order 6 pixels giving good correlation peak. The peak locking effect was also found to be negligible.

Tables in the preceding section have given the GNDP and PDP for this experiment.

In the following, the velocities are normalized by U2, second moments by U22 and length scales by the radius r2 = 78 mm. 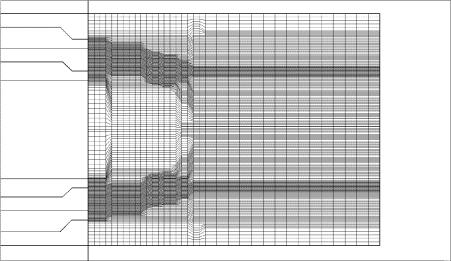 The original data set is first interpolated on a finer and more regular (along Oz axis) grid, keeping all the original traverse positions, and interpolating raw data along each traverse, on a grid of size 0.5-mm in the z direction. This produces a smoother behavior of the particle traces. This new data set is symmetrized: for a given value of x, where the average values at position (x, 0,z) and (x, 0, -z) is set as the values at these two points. For all experimental values, this gives a perfectly axisymmetric field. An error field is also recorded: this represents the axisymmetric errors, and corresponds to the raw data minus the averaged data. It gives a map showing the percentage of error in axisymmetry.

The inflow is a fully developed annular flow. The combustion chamber is cylindrical and 4 tubes evacuate the flow far from the nozzle region, so that it is expected that the outflow conditions have no influence on the measurements.

The sources leading to the error in the mean quantities and non-axisymmetry are discussed and an estimation of these errors is given in this section. These errors can come from several independent origins:

(b). Errors in the estimation of the instantaneous velocities by the LDA system: This velocity is proportional to the Doppler frequency shift, which is estimated through a Fourier transform. Since this law is linear and the proportionality factor is fixed, the LDA apparatus does not need any calibration. The burst spectrum analyzer used to process the Doppler signal received from the probe volume has high resolution. This provides at the output a very low error, depending on the record length. In the present experiment, the record length for the first beam (axial velocity) is 16 and 64 for the second (radial velocity), giving (according to the manufacturer’s specifications) errors of 0.025 % and 0.006 % for axial and radial velocity respectively. This is an infinitesimal source of error compared to the other sources.

(c). Statistical error in the mean values: Since the in-flow conditions are stationary with good precision, it can be stated that when taking N measurements, the mean of these N values converges toward the true average, when the measurements are taken during a time larger than the correlation time. With a Reynolds number of about 3., the flow is fully turbulent, and presents an energy cascade, which introduces correlations. These correlations are characterized by the largest eddy in the system, given by the dimension of the outer jet, of diameter 0.16 m. With a mean velocity in this region of about 4 m/s, the largest time scale of correlation at a given position is of the order of 40 ms. Depending on the zone of the flow considered, the detection of several thousands particles took between 10 s and 2 minutes, which is much larger than the correlation time. This confirms that the mean of N values should converge toward the true mean value.

The convergence of the statistics depends on the number of events that are chosen. A direct test can be applied, indicating that to reach an error of less than 2%, N=3,000 is sufficient for axial velocity and stress, whereas N=800 is sufficient for radial velocity. For better accuracy in the measured quantities, at each grid point several thousands data (between 3,000 and 16,000 depending on the location) have been recorded. This will provide statistical errors that are below, or of the same order of magnitude as the geometry errors.

(d). Geometrical errors in building the burner leading to a non-axisymmetry: When all other sources of errors are minimized, a superposition of different traverse provides a direct estimate of the geometry error. With careful construction this error is kept to a minimum, since, in order to provide comparisons between measurements and CFD codes, very good axisymmetry of the measurements is needed. This error has been checked for different traverse positions close to the nozzle exit. The excellent superposition (within 1%) of the measured quantities from different angular positions shows that at the exit the axisymmetry is of high quality. For axial and radial velocity, turbulent kinetic energy and stress, there is globally a very good superposition: the average error (relative to

) is below 2% for mean values and for second moments (relative to the maximum kinetic energy, km=0.18); the average error in the quantities U, V, τuu, τνν and τuν for the nozzle region are given in Table 6.

The data are given as ASCII files. The overall size is 2 MB.

Figure 5: Schematic view of the test bed for experiment 2

Figure 7 shows a sample of an instantaneous vector field. The particle traces represent streamlines in this figure. The highly 3-D nature of the field is demonstrated in this figure.

Figure 8 shows the mean vector field of all the 270 instantaneous velocity fields. It is seen that the 3-D nature seen before has been eliminated from the result. The particle traces represent streamlines in this figure also. The axisymmetry is also quite high in this figure. For comparison, the positions are determined from this figure. 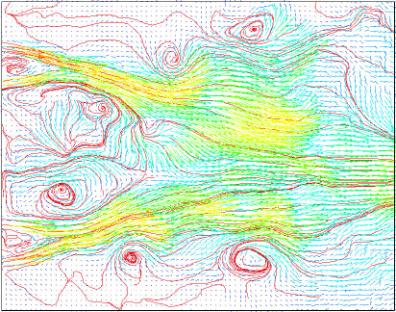 Figure 8: The average velocity yield calculated from all the 270 vector fields.

The experiment provides the two components of the instantaneous vector field in the meridional plane in the nozzle region in an 80x63 uniform grid. Each of the 271 files also contains the complete processing history.

GNDP and PDP are given in the tables of the preceding section.

The grid and the velocities are given in cm and cm/s, respectively in these files. The coordinate system has its origin at lower left corner with the first quadrant vector directions. The comparison with origin at axis should be attempted after shifting the origin. The average velocity field should be used for this purpose.

The velocity profile of the inlet flow to the combustion chamber is fully developed flow between two parallel plates at Re = 180.

Alternatively, computation could be started from the inlet to the ducts (geometry given in Table 8) with constant total pressure.

The flow has an unrestricted discharge at the combustion chamber exit. The volumetric flow rate is 4.09x10-5 m3/s.

There are 4 major sources of measurement errors in the instantaneous vector fields associated with PIV data acquisition and processing these are listed below.

The additional uncertainties in the average velocity and RMS velocity fields appear when these are calculated from all the 271 vector fields. These uncertainties are:

The variation of flow through the model was smaller than 0.1% during the measurement.

The interrogation window covered a square area of 1.68 mm on each direction in the physical plane and the window is shifted by 0.88 mm for each interrogation. Thus, the averaging region is a volume close to 5.6 mm3. Therefore, close to the nozzle exit, in the shear layers, the velocity profile is not reliable.

The pulse duration was 600ms and the pulse separation was 2500 ms. The “instantaneous” value obtained is actually the value averaged over 2500 ms. Therefore, all fluctuations at frequencies higher than 400 Hz are averaged out.

Each vector field contains 5040 interrogated vectors. On the average 50 outliers were detected and interpolated. Therefore, about 1% of the vectors are interpolated.

271 instantaneous vector fields each containing 5040 vectors and their vorticity, shear strain and normal strain fields in a uniform grid are offered. Each field is given in a NetCDF file with 80x63 vectors for velocity and 78x61 scalars for the rest. In addition, an average vector field file and an RMS file computed from the instantaneous field are present.

The files could be converted to text files. Text files written in four columns; x, z, Vx and Vz, could also be deposited to the database depending on demand.