The flow over periodically arranged hills at Reynolds numbers from 5,600 to 37,000 has been investigated experimentally and numerically. Since Mellen et al. (2000) presented this flow case its geometry has been used for various studies and has served as a benchmark case in different research groups. The flow features phenomena such as separation from a curved surface, recirculation and natural reattachment. It can be simulated at relatively low computational costs because of the periodic boundary conditions and the two-dimensionality of the geometry, not the flow. DNS have been performed up to Re=5,600 (based on the bulk velocity above the hill and the hill height) [Peller and Manhart (2005)] whereas numerous LES works were published for Re=10,595 [e.g. Fröhlich et al. (2005), Breuer et al. (2009), Temmerman and Leschziner (2001)]. The flow was also a test case at 2 ERCOFTAC/IAHR/COST workshops and in the European ATAAC project.

A physical experiment has been set up in the Laboratory for Hydromechanics of the Technische Universität München to investigate the flow experimentally and provide reliable reference data (Rapp, 2009). Recently, a complementary numerical and experimental study was carried out for this flow case (Breuer et al. 2009) relying on highly resolved flow predictions (DNS and LES). The focus of this study was twofold:

(i) Numerical and experimental data are presented which can be referred to as reference data for this widely used standard test case. Physical peculiarities and new findings of the case under consideration are described and confirmed independently by different codes and experimental data. Mean velocity and pressure distributions, Reynolds stresses, anisotropy-invariant maps, and instantaneous quantities are shown.

. Starting at very low Re the evolution and existence of physical phenomena such as a tiny recirculation region at the hill crest are documented. The limit to steady laminar flow as well as the transition to a fully turbulent flow stage are presented. For

turbulent statistics are analyzed in detail. Carefully undertaken DNS and LES predictions as well as cross-checking between different numerical and experimental results build the framework for physical investigations on the flow behavior. New interesting features of the flow were found. 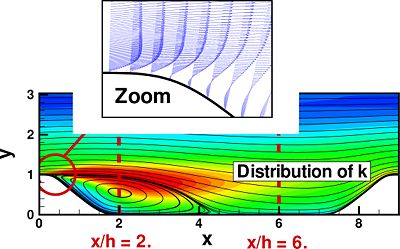