The test rotor is the first stage of a two-stage fan, a blade of which is shown in Figure 1. The blade is of relatively low aspect ratio, implying significant three-dimensional flow effects. The experiment demonstrates phenomena characteristic of local transonic flow, including shocks, supersonic tip-jet flow, etc.

The rotor was tested in an axial flow compressor test wind tunnel. The entire rotor operating characteristic was defined, of which two cases were published in the report: one near-design case and one near-stall. Table 1 presents the geometry and operating data at the experiment corresponding to the design point of the rotor, as found in [1]. The near-design case was chosen for this UFR.

The overall pressure ratio and efficiency were calculated based on appropriate averages of the radial distributions of total pressure and total temperature at upstream and downstream survey locations. The details of the averaging procedure are detailed in [1].

In addition to overall parameters including pressure ratio, mass flow, and efficiency as well as comparison of the outflow conditions, direct comparisons of field distributions of the Mach number are used to assess success of the numerical simulations. 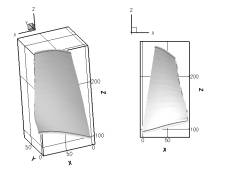 The tests on Rotor 67 were conducted at the NASA-Lewis single stage axial flow compressor test facility.

Laser Velocimetry (LV) was used for sampling field data in the axial and tangential directions. The experimenters numerically tested the configuration to ascertain the effect, if any, of neglecting the radial velocity component on the Mach number. They found the discrepancy in the Mach number due to neglecting the radial velocity component to be minimal.

Overall values such as total pressure, total temperature, and flow angle were collected with a radial survey probe at 9 radial locations and two axial locations. These sampling locations are shown in Figure 2: the axial positions of the two sampling locations were used for sizing the computational domain for the numerical simulations conducted by the author. Static pressure was measured with an 18°-wedge probe. Additional measurements of total thermodynamic quantities were taken near to the endwall regions, and static pressures were taken on the walls. Mass flow was determined by a measured pressure differential across a calibrated orifice plate.

Because the thermodynamic quantities and flow angles were measured with probes, blockage effects are possible in the measurements near the wall. This appears to have happened especially in the static pressure measurements, casting doubt on the published size and location of the boundary layer at inlet and outlet. The published data for the near-design point case at the inlet and outlet is plotted in Figures 3 and 4 respectively. In both figures we see that at around 9/10ths of the span the static pressure distribution has a kink. This kink could result from two possible phenomena. The probe used to measure the static pressure may have caused or suffered from blockage problems near the wall. A more significant cause might be the tip leakage flow. The tip leakage vortex is highly unsteady and the legitimacy of measuring steady quantities in this region is questionable. The total temperature exhibits a similar aberration at the outlet.

Figure 3: Inlet Conditions in the Experiment

Figure 4: Outlet Conditions in the Experiment

These uncertainties in the boundary conditions can have serious ramifications in the convergence of three-dimensional numerical simulations based on this data.

The experimenters also compared the radial survey probe data to the LA data, reporting agreement at all spanwise locations of within 8%. By qualifying the data as ‘near-design point’, the experiments expose the fact shown in Table 1: that the design point was only achieved within 0.8% of the desired pressure ratio and within 4% of the design mass flow.

This Jameson solver belongs to the class of Beam and Warming methods, for which stable solutions require an initial condition based on boundary conditions. A complete treatment of the solution method is included in Jameson [7]. Stress-tensor calculations within the Navier-Stokes equations rely on turbulent viscosity, which is supplied by a turbulence model. To facilitate convergence, 3200 iterations were conducted on a coarser grid using the Baldwin-Lomax turbulence model [3], whose results were interpolated from onto a finer grid with which three separate turbulence models were tested, each for 1000 iterations: the single-equation model of Spalart and Allmaras [4], and the two-equation models k-ω and k-ε. Baldwin-Lomax is a ‘zero-equation’ turbulence model whose accuracy is questionable, but it provides a useful initial solution for more sophisticated turbulence models.

The shock structure present in transonic turbomachinery flow can present particular problems. The high gradients through the shocks impose a very small local time-step, which slows overall convergence. To maintain solution stability, ‘SLIP’ artificial viscosity is employed in all simulations. This artificial viscosity can in turn predict prematurely shock-induced separation, which might otherwise not be present in the experiment. The location of shocks has a large influence on the mass flow. Thus the shock structure has a large influence on overall performance parameters including aerodynamic loss and outlet flow angles.

The modeling of the tip gap and in particular the interaction of the secondary flow through the tip gap with the boundary layer on the casing are also points of interest. Because flow in the blade tip region of Rotor 67 is also transonic, the success in modeling the tip gap has large ramifications on the accuracy and convergence capabilities of the simulation.

The grid is a straight H-mesh; straight meaning that all iso-j planes have the same axial coordinate. Figures 5, 6 and 7 respectively show S1(hub,tip) and S2 planes of the grid. The grid is comprised of 337,920 cells, the maximum stretching of which does not exceed 1.2. With these figures one finds that y+ at the wall is nowhere less than 100, which in conjunction with the Spalart-Allmaras turbulence model, necessitates a wall-function. In this study, a modified Spalding wall-function was chosen. The grid, while not especially fine for a turbomachinery grid, is finer yet than that used in the Rotor 67 simulations of Adamczyk[5]. The simulations in [5] both converged and yielded good agreement with the experiment. Noteworthy is that the study in [5] centered on the effect of the tip gap, which in that grid was represented by two cells. The main grid data is given in Table 2. 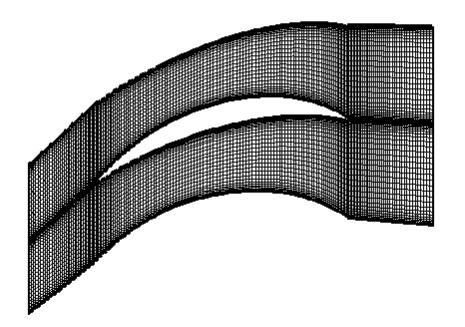 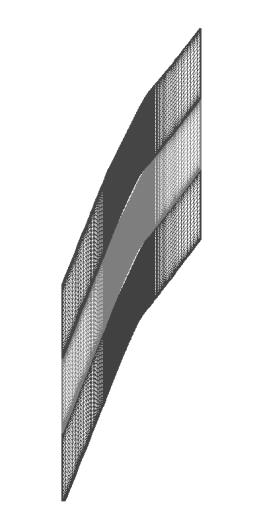 The domain is bounded by 4 types of boundary conditions. Walls are treated using a dummy value on the ‘inside’ of the wall, such that the spatial-central-differencing scheme forces the normal velocity component to zero. Periodic boundary conditions (fore and aft of the LE and TE of the blade) permit information to be transmitted from opposing circumferential sides of the domain, reducing the spatial computation requirements from that of the entire rotor (22 blades) to the space between 2 blades. At the inflow boundary, 3 quantities must be specified: total pressure, total temperature and flow angle. Because of the local supersonic flow present in this rotor, the tangential velocity is required as well. The turbulence equations require an estimate of the turbulence intensity. At a subsonic outflow boundary, one quantity is required: static pressure. This can be given as a radial distribution, as the values are given for the inflow boundary, or as a single value on the hub or casing which is radially extrapolated using a radial-equilibrium equation, such as Equation 1. By varying the outflow static pressure, one can set the mass-flow and thus explore the blade off-design capabilities; however, supersonic outflow boundaries cannot be prescribed, as flow information can only flow downwind. Therefore, there exists a minimum outflow static pressure representing choked flow. Attempts to prescribe outlet pressures lower than that corresponding to choked flow have negligible effects on the blade forces, because the choked flow acts as a filter, preventing communication upstream of the trailing edge.

The case presented in this UFR represents the near-peak-efficiency condition presented in [1]. An outflow static pressure on the casing wall of 1.36 bar was prescribed, with the radial distribution of which being computed using a radial equilibrium equation such as the one found in reference [6]: ∂p/∂r = (ωω Cw2)/r.

The boundary conditions for both a near-peak-efficiency and a near-stall case are included in [1]. Because a physical probe was used to sample the flow for the boundary conditions, their values are somewhat suspect, especially near the wall. As shown in Figure 4, the outlet static pressure has a particularly suspicious deformation near the casing. The simulation parameters are summarized in Table 3.

Several features should be noted in the above parameters. The relatively small CFL number reduces the time-step to minimize convergence problems. The selection of the radial equilibrium model with casing fixed static pressure as outflow boundary limits comparability with experimental results, as will be shown.

An open tip function, rather than a physical grid addition, was used to model the tip gap. In this model, the blade grid extends from hub to casing and a periodic boundary condition is applied to small number of cells located between the location of the blade tip and the casing such that flow information crossing the grid on one side of the blade is transmitted and output in a reflected fashion on the other side. Because the blade is thin at the tip, this abbreviated calculation yields useful information; however, there are some drawbacks. Numerical errors and longer computation times can result from the necessary grid refinement near the blade tip. The most important disadvantages of the use of the open tip function concern however the production and transport of turbulence. The production and dissipation of turbulence is naturally not accounted for within the tip gap. Turbulence can only be convected across the tip gap. Boundary layer behavior between the casing and the blunt blade tip is only modeled as a mirror of behavior occurring on the casing surrounding the gap.

Table 4 summarizes the results of the calculations after 1000 iterations with the Spalart-Allmaras model.