Abstr:Flow behind a blunt trailing edge

The flow behind a blunt trailing edge is of interest to turbomachinery research due to its impact in the greater understanding of the unsteady flow phenomena, which appears behind the turbine blades. The main characteristic of the proposed UFR is the vortex shedding, which is generated from the blades and causes the acoustics resonance and the structural vibrations.

This type of flow can be view as a special class of the flows over the bluff bodies that have significant separation regions, as opposed to the streamlined type of fluid flows. Compared with the flow over cylinders or flat plates, the vortex shedding from turbine blades is more complex because the boundary layers on the pressure and suction sides are not identical.

It is well known that the flow over cylinders or flat plates is relatively well documented in the literature, but in our knowledge it seems that for the suggested UFR we have only a few detailed studies, which we have referenced, at the end of this document. We also underline that the experimental data of this proposed UFR are of great importance in the validation of the modern CFD codes and particularly relevant for the turbulence modeling studies and research.

In the QNET-CFD project, this UFR is relevant for several Application Challenges mainly documented in the QNET-CFD thematic are six on Turbomachinery Internal flows.

According to Sieverding et al. (2002) the main characteristics of such flows are:

The interest in increasing the knowledge regarding this UFR is marked by one of the most consistent research effort contained in the European Projects BRITE/EURAM "Time Varying Wake Characteristics behind Flat Plates and Turbine Blades" and "Turbulence Modeling of Unsteady Flows in Axial Turbines". The aim of such studies was to gain insight by the combined experimental and computational work.

This research conducted at the end of 90's at von Karman Institute (VKI) showed that a comprehensive investigation requires for analysis a large turbine cascade. Consequently, the requirements for high spatial and temporal resolutions were fulfilled and the confidence in experimental data was drastically increased.

Therefore, the configuration under review will be a very large-scale nozzle guide vane with a relatively thick trailing edge. This blade cascade is sketched in Figure 1. 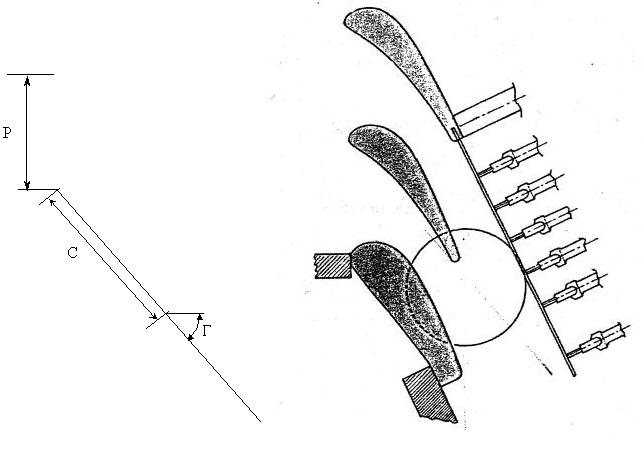