This application challenge deals with the flow prediction in the stationary annular compressor cascade with rotating hub that has been installed at the Laboratory of Thermal Turbomachinery of the National Technical University of Athens (NTUA/LTT). The cascade has been designed for studying the tip-clearance effects in annular cascades at high but subsonic Mach numbers. The test cascade simulates the flow through a rear stage blading of an axial, high-pressure compressor where the tip-clearance effects have the greater influence on the flow structure. Therefore it contributes to the research community original experimental data on a high-speed machine, alleviating the lack of detailed measurements in such configurations. The test cascade has been designed by SNECMA, in the course of a European funded project set up for studying tip-clearance effects in axial compressors (“Advanced Civil Core Compressor Aerodynamics,” AER2-CT92-0039, 1/1/1993-30/9/1996).

To provide as a complete a set of flow field data as possible, measurements accounting for the cascade performance have been performed using 5-hole probes and detailed measurements inside the blade passage have been carried out using both 5-hole probes and a three-dimensional Laser Doppler Velocimetry system. Measurements and complementary numerical calculations have been performed twice, in the context of two European funded research projects (“Advanced Civil Core Compressor Aerodynamics” and “Assessment of the Physical Processes and Code Evaluation for Turbomachinery Flows,” BRPR-CT97-0610 1/1/1998-31/8/2000). Different solution methods, a significant number of turbulence models and numerous grids have been used in the calculations; nevertheless they all feature an incapability of reproducing the physical patterns downstream of the blade, despite their success in reproducing them in the blade passage. The measurements presented herein have been performed under the contractual obligations of the second research project mentioned above. The computations that accompany them have been obtained using a multi-domain, pressure-based, three-dimensional Navier-Stokes solver incorporating a high-Reynolds-number k-ε turbulence model.

While many studies have been performed to investigate the effects of tip-clearance flows on the performance of axial compressors and to study the structure of the corresponding flow field, there has been a lack of detailed measurements on high-speed machines. The tip-clearance flows are not only important because of their contribution to the overall losses of a turbomachine, but they also play an important role in determining the useful flow range of a compressor, i.e. its stability limits. The test rig described herein provides the possibility of experimentally studying the tip-clearance effects in a compressible, high-speed flow configuration. Thus, it contributes original data in this area for the first time, since detailed measurements were available only in incompressible flow configurations up to now. Experimental work providing such information for tip-clearance effects in rear stages of high-pressure compressors has been performed in close collaboration with industrial partners. Since, possibilities for simulating tip-clearance effects through numerical flow models exist nowadays, the main purpose of the experimental facility described herein was to provide data for validating the results from the computational procedures and to allow the improvement of the theoretical modelling.

The design and assessment parameters for this application challenge can be grouped together into two major categories, one characterising the operation of the cascade and a second dealing with the details of the flow-field in the blade passage. In the former category the size of the tip-clearance gap (t), the rotating speed of the hub (N), the mass flow rate (m), the distributions of the stagnation quantities (total pressure and total temperature) at inlet as well as the distributions of the flow angles at the same location are encompassed. The latter category comprises the velocity components in the axial and the peripheral direction, the Mach number, the static and total pressure, as well as the yaw angle at any measured location. Since the cascade is still, with a rotating or a non-rotating hub wall, the peripheral yaw angle corresponds to the flow angle in the absolute system of reference. The comparison between the experimental and the calculated values of the aforementioned quantities, in the form of circumferential mass average span-wise distributions at various measuring stations (these stations will be defined at Section Overview of Measurements) is used to judge the competency of the computations. All velocities are presented in a non-dimensional form using the tangential velocity at the hub as reference velocity (Vref=ω∙rhub=167m/s). Additionally, the span-wise distribution of losses, in the form of the Pressure Loss Coefficient (PLC) is used for comparison. PLC is very commonly used in turbomachinery applications and is defined as

stand for the circumferential mass average, over the inlet plane, values of static and total pressure at the same radius, r.

The layout of the annular cascade facility is shown in Figure 1. The air stream enters the facility through a smoothly contracting bellmouth into a spiral casing (scroll), which delivers the air flow with swirl into a contracting axisymmetric “bent duct” giving to the annular space. The test section of the facility follows containing the annular cascade with a hub-to-tip radius ratio of 0.75 (rhub=244 mm, rtip=324mm). A detailed illustration of the test cascade is provided in Figure 2.

Performing experimental measurements in rotating blade passages is fraught with problems, so a stationary blade with a rotor airfoil (see Figure 3) was designed by SNECMA with an inner wall rotating from pressure to suction side, in order to simulate the relative blade/end-wall motion. The cascade consists of two sets of 19 untwisted blades, with constant, along the blade height, chord (C=100mm) that are placed at 51.4o stagger angle and feature inlet and exit angles of 60.1o and 44.6o, respectively. They are used to form two alternative tip-clearances heights of 2% and 4%C, which are constant along the chord. The blades are mounted on the annular casing. This allows a circumferential movement of the cascade around the axis of the annulus, so as circumferential transverses to being performed using fixed measuring instruments. The relative motion of the blades and the end-wall is created by cantilevering the blades at the casing and allowing the hub to rotate via a controlled speed electrical motor. The rotating part of the hub extends from 6.85Cax upstream up to 1.98Cax downstream, both distances being measured from the blade’s leading edge. The maximum attainable by the electrical motor rotational speed is N=8000rpm, whilst the experiments have been conducted at N=6540rpm. In addition, experiments have been carried out for a still hub, to allow for the study of the effects that the relative end-wall/blade motion introduces to the flow.

After the exit of the test cascade, located at 2.38Cax downstream of the blade’s leading edge, the flow is entering a second cascade, whose purpose is to recover the swirl and bring the flow to the axial direction. A set of connecting ducts brings the flow to the inlet of a single stage axial compressor, which is used to drive the facility. The compressor discharges to the atmosphere through an appropriate arrangement.

It must be stressed that aiming to producing as a complete experimental data set as possible, experiments have been performed for a still hub but with no tip-clearance. The corresponding measurements and calculations are the subject of another application challenge proposed by SCNECMA. Finally, it must be noted that the blade airfoil is proprietary to SNECMA and some restrictions regarding its free distribution apply. The general policy regarding its distribution is that any member of QNET project and/or ERCOFTAC is allowed to compute this test case. So, anyone interested in carrying out computations for this test case should contact Prof. Kyriakos Papailiou of NTUA/LTT in order to obtain permission and the digitised blade geometry.

Before proceeding further on, an understanding of the flow physics is provided. The flow in the annular compressor cascade is of high-speed, the maximum local Mach number in the annular space is about 0.6 resulting in a Reynolds number of approximately 1.1∙106, while the Mach number that corresponds to the tangential velocity of the rotating hub is 0.504. The experiments have been performed for a mass flow rate, m=13.2kg/s. Although the flow in the cascade is turbulent, measurements of turbulent quantities have not been performed. The distributions of the flow quantities at inlet were nearly independent of the size of the tip-clearance gap. As reported by Mathioudakis et al. (1997) the circumferential non-uniformity of the flow quantities at inlet was found to be very small on a blade passage scale. The working mean is air, which is considered to be ideal gas with g=1.4 and cp=1004.5J/Kg/K. The De Haller number of the flow (Wexit/Winlet) is 0.73 at 12% span. The average total pressure at inlet is 96500Pa.

Since we are dealing with a stationary blade, the flow can be regarded as isothermal, the total temperature value being 288.15K. Even, in the rotating hub test cases, the increase of the fluid’s total energy due to the rotation of the hub is not significant and confined in the near the rotating hub region, as this has been confirmed by the experiments.

As far the physics of the flow are of concern, the flow inside the cascade is characterised by the development of a complex vortical structure, whose relative strength and location as the flow moves downstream is mainly affected by the size of the tip-clearance and the rotation of the hub.

In order to gain some additional insight about the flow between the blades and confirm the steady-ness of the flow, some flow visualizations were performed. Pictures of oil flow visualization on the hub wall of the cascade are shown in Figure 4. The three pictures show the wall flow from different viewpoints. In the left picture the flow emerging from the clearance gap, on the suction side of the blade (located at the right of the picture) is shown. A three-dimensional separation line, corresponding to the trace of the clearance vortex is formed by the interaction of this clearance-emerging flow and the flow incoming to the passage flow. It is also noticed that the flow moves in the direction perpendicular to the blade in the region downstream of the trailing edge. This flow travels towards the pressure side of the neighbouring blade. As it approaches this blade it splits into two branches. One is travelling upstream and turned towards the pressure side, it enters the clearance gap to emerge from the suction side, as shown clearer in the upper picture at the right. The second branch is turned downstream, to by pass the blade and emerge from the back of the trailing edge into the adjacent passage. An isolated region is thus formed in the clearance region, on the pressure side of the blade, as shown in the lower picture at the right. The movement of oil drops placed within this region indicates that it contains a vortical structure. 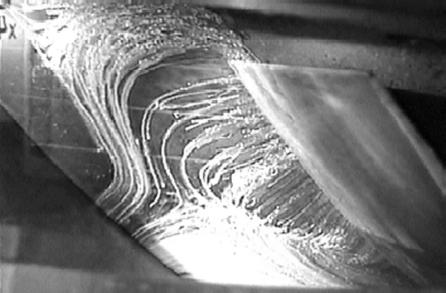 View of the rear of the passage. 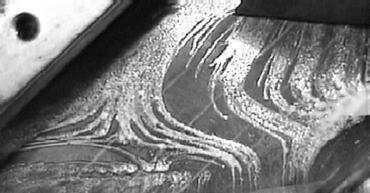 Local view close to the blade trailing edge of the pressure side.

From these pictures it is observed that the fluid emerging from the suction side along approximately one third of the blade from the leading edge has entered the gap flowing parallel to the hub wall. The fluid emerging through the rest of the suction side is fed by a three dimensional movement from higher radial positions in the pressure side of the blades. As shown in the left picture, the area along the clearance gap on the pressure side is not fed by the fluid coming from the opposite side of the passage, being bound by a three-dimensional separation line. No oil drops move into this area and the only way to visualize the flow is by placing drops into that area.